Mainly Gameplay focused role, but necessarily versatile due to the small nature of the team (at first one of only four programmers!) Personally designed, implemented and managed a visual scripting tool for designers and other team members described as ‘the best design tool I’ve ever used’. Given ownership of several features of the game, and created them from scratch. Have also deployed to, fixed and performed optimisation investigation on consoles. Achieved major life goal when taking part in spiritual successor to the DK rap. See my initial Playtonic interview here for more information on why working on Yooka-Laylee was a personal dream come true. 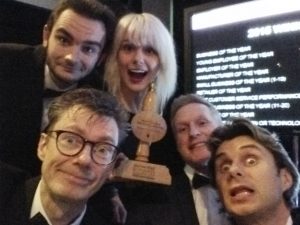 Myself and a small section of the team at the Burton Mail Business Awards!